The 600k Day: Return of the Thousand Yard Stare 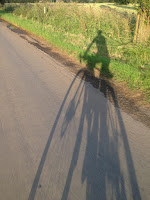 Challenges have a habit of growing whilst in the fermentation stage. A desire to pepper the year's riding with some memorable and challenging days out will eventually result in pushing the limits too far. One of these days that realisation will kick me in the guts miles from home shortly after legs have turned to spaghetti and brain to jelly. 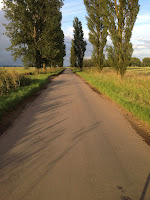 I'd been planning to ride a 600k audax for a couple of years, initially to qualify for the 2016 PBP and latterly to gain experience for a Trans Continental race entry. There are quite a few 600k audaxes, many of them allow forty hours to complete the ride and offer somewhere to get a bit of sleep during it. I decided that sleep wasn't necessary and it would be easier to just keep on keeping on and sleep afterwards. It's doable in a tough 24 hour mountain bike race and all I've got to do is keep spinning cranks until the miles are done, no steps and roots to ride at 3 am in the dark, just miles of unrelenting blacktop.

That 600k aspiration got turned into a plan at short notice triggered by a failed GT24 attempt, a good weather forecast, a day off work and the prospect of shortening days for the rest of the year. There a were a few 600k routes I could ride from home but only one that was a loop, the temptation to abort if passing the starting point in the small hours on a lapped route could be too much. Committment was to be engineered. A Pair of Kirtons 600 started in Poynton, crossed the Pennines to Holmfirth and approximated a trapezium with the Humber Bridge, Boston, Whitchurch and Greenfield as the corners.

I joined the route in Holmfirth on Thursday afternoon just as rush hour traffic was building to its frustrated peak. The sun was out and a light tail wind encouraged a fast and easy spin east to the Humber Bridge. Averaging close to 19mph I stopped at a super market in Brough for pastries and water, and still arrived at the Bridge in time to capture the sunset. This was the easy bit, the sun set and I turned right into a light headwind, next stop Boston, Lincs. 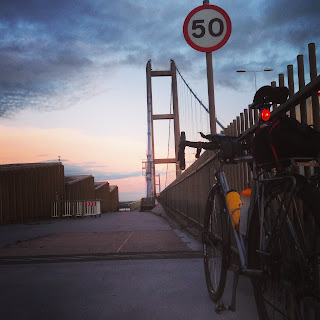 I'd never ridden all night before and it showed as I realised that my GPS didn't light up as I reached each junction, I needed to jog the GPS' joystick frequently to light up the screen so I could check I was on course. Traces of the day gradually faded from the sky, I glanced up to see if I was to be treated to a moonlit ride but far from it, the moon was waxing, a narrow crescent of milky glow in the night sky.

A sprinkling of stars interrupted the darkness of the night sky but my eyes needed to stay focused in the beam of the dynamo powered front light. Looking out for pot holes, gravel, road signs and junctions on hedge lined lanes staved off the usual boredom of flat roads. These were quiet roads and most people now looked to be home and in bed judging by the lit first floor rooms of the houses I passed. Tonight's ride was now soundtracked by the whirring of freshly oiled gears and the chugging of agricultural pumps. If I upped the effort squeaking pedals added their beat to the montage. Unlike when I had been trail running at night time I saw very few animals; I won a race with a rabbit near Lincoln and nearly had to bunny hop a cat in Misterton but anything more exotic was decomposing on the road. Badgers, squirrels, pigeons and rabbits all rolled to fetid pancake by passing wheels. Occasionally a large insect would ricochet off sunglasses or helmet to break the monotony of the small hours, the passing of time had slowed right down. The landscape was ripe at this time of year, the sweet smell of rapeseed and hedgerow blooms contrasting with an occasional pungent rotting odour from the hedgerows. 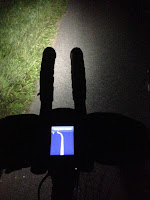 In Gainsborough I stopped at a petrol station for food and water but spent several minutes waiting for a girl in heels who was solving a seemingly complex equation involving several bottles of cheap spirits. Continuing out of the petrol station forecourt I headed west for several miles following the GPS until it pointed up a road signposted Goole. This seemed odd and now the my position on the GPS didn't appear to be updating. I pulled over to check my position in relation to my planned route andnas I zoomed out to find the purple track I had been following I realised I was several miles off route. According to the map I should have turned off before Gainsborough so I spun the bike round and retraced my steps back to the town and up the first hill in 50 miles. 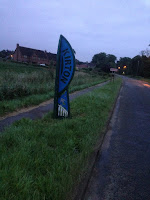 The fenlands were predictably dull by night, parallel dykes and flat straight roads were good for maintaining pace but bad for a sleep deprived brain. Not far south east of Lincoln I joined a former railway line cum greenway which would take me nearly all the way to Boston. Twenty miles later and I was finding it really tough to stay awake, I'd already made and drunk a caffeine laced energy drink but it wasn't enough and I started looking for somewhere to grab a brief nap. A damp lawn next to the fenside lane I was riding was sufficient for my exhausted state at 3.15am. I threw the bike against the hedge, took off my helmet and set an alarm for the future or 3.30am to be precise. I fell asleep to the sensation of insects crawling up my arms and legs and was woken at 3.40am by fat droplets of rain. I'd slept through the alarm, still I was refreshed and ready to press on. First light was emerging in the eastern sky, day was due and there were a lot of miles to roll before it was done. 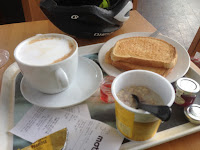 Life was stirring in Boston, more cars on the road and the occasional pedestrian. I was now heading broadly west for a very long time and unfortunately the wind had settled on blowing from west-south-west at 15mph, time to get acquainted with the tri-bars I'd bolted on at the last minute before leaving home. Dropping down onto my new handlebar ornaments saved energy into the headwind but there was no doubting that I still had a long way to go and the skies were stacked with leaden clouds promising rain. After a couple of hours I reached a trucker's cafe at the A1 and I stopped to order a coffee and bacon roll, I was fed up with flapjack and the usual high energy foods I ate whilst riding. The rain poured down outside whilst truckers queued for their breakfast and made jokes about the football inside. I didn't have time to wait for the rain to abate but promised myself more breakfast at Donington services which seemed to take an age to reach, the westerly wind had increased to 20mph by the M1 but the sun had emerged and the day was feeling more normal. Costa provided porridge, toast and coffee, all needed for the next fifty miles to Stone, the going had become undulating which wasn't altogether unwelcome - the tedium of the flat was hopefully past.

I planned to stop at the Stone M6 services but spotted a chippy in the town where I ordered battered mushrooms (a new chip shop delicacy), chips and a coke. Proper fuel for the last leg. I closed my eyes for ten minutes and then set off west again towards Wales. This part of the route was lumpier still on pleasant tree lined lanes and after only an hour and a half I made the final turn north west. I was very glad of a tail wind but conscious that I had estimated the distance home from here as three to four hours but it wasn't based on any evidence and it was starting to seem unlikely. School closing time in Middlewich and rush hour in the Cheshire suburbs meant a hectic afternoon's ride back to Manchester. From Poynton I headed  north through the suburbs of Manchester, initially 'nice' and green but tired and post-industrial by Stalybridge. By now 23 hours in the saddle had taken their toll the saddle was no longer somewhere I wanted to be, the last twenty miles up and over the Pennines was ridden out of the saddle. I arrived home and the thousand yard stare took over. Time to take a minute before planning the next one.

Posted by Gutsibikes at 12:54 No comments: