“The best 18 hours I’ve spent on a bike” came to mind during whatever subconscious cogitation Monday's early morning dog walk on the local moor had triggered. It wasn't until Monday morning after a full night's sleep that I had fully appreciated the awesomeness of the previous weekend's adventures. 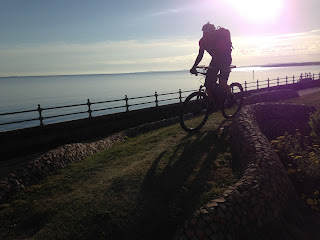 Step up Mr Stitz, fess up and take credit for: 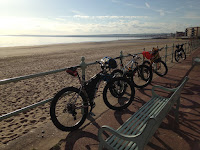 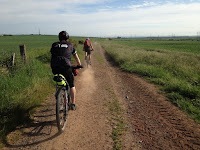 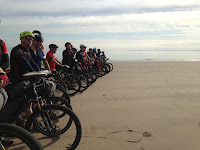 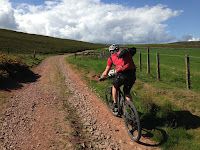 Ok, so we were lucky (again) with the Scottish weather but this really had been a great day's riding. Markus Stitz (organiser of the Capital Trail and other Scottish bike packing events) must have spent years searching out and linking trails to make this route. 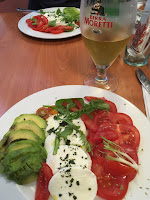 Saul and I had travelled up Friday afternoon, eaten Italian in Musselburgh and slept in a posh garden shed at Wallyford campsite. It was the usual early start to get to the start line on Saturday but less adrenaline than usual, we were here to enjoy this one and racing would be shelved for another weekend.

Down at the start line a breakfast of hot rolls, coffee and orange juice was enjoyed overlooking the Firth of Forth at Portobello beach. A tractor was out combing and tidying the soft sand of the beach, meanwhile many of us riders took a minute to remember Mike Hall who's ashes had recently made it back to his heartland in mid Wales. 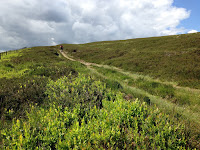 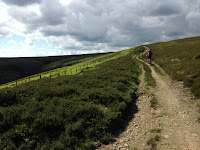 The start of the event was beautifully relaxed, all fifty four riders rode as far as they could on the soft sand, shoved up on to the promenade and lazily span off towards Musselburgh. Once off the prom Saul and I picked up the pace along the greenway from Musselburgh out under the East Coast Railway and Edinburgh ring road into a housing estate, up to a large country estate and onto woodland single track. From here we enjoyed single track, old railway lines, narrow country roads and estate tracks up into the hills south of Edinburgh. Flowering gorse, buttercups, cow parsley and lush green grass everywhere. It was like the saturation filter had been turned up to the max on our surroundings, the colours around us were bright and vibrant under clear blue skies and this was a Scotland that I was unfamiliar with - used only to dull green under leaden skies, not this new technicolour version. It really was a privilege to be riding these hills on a day like this. 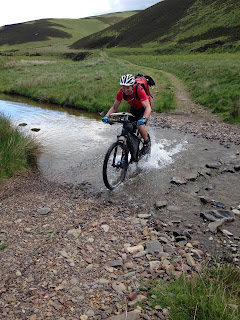 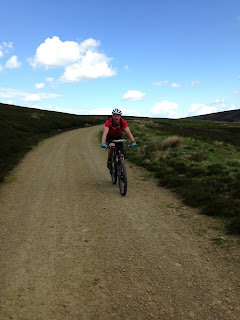 We climbed high on estate roads over bilberry and heather covered moorland only to descend raucously into forded burns and grind back up quad searing climbs to the moorland plateau under the metronomic revolutions of wind turbines. Good times indeed. 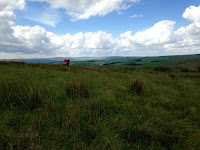 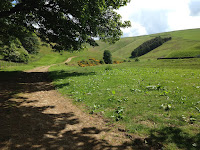 Eventually we dropped down a long valley back towards civilisation taking in main road, more single track and ancient drove roads into Melrose. Gnarly single track alongside the River Tweed was great fun, Saul was as usual riding every flight of steps, I was more cautious. A particularly tricky set of steps saw Saul performing an emergency dismount and his treasured Yeti bouncing down head over heels to land on the rocks beside the Tweed. A two man recovery effort ensued followed by the realisation that the front brake lever was bent double and dangling under the wheel; broken lever clamp. Was that game over we wondered? 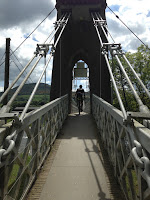 I like the challenge of trail-side repairs, a couple of hefty cable ties were dragged from my toolkit to lash the broken clamp back on the handlebars. It wasn't ideal but it put us back in the game, or back on route at least.

Following a brief refuel in Selkirk (water and fresh croissants) we slogged our way up to the Three Brethren. Three big piles of stones with a commanding view of Selkirk, I had plenty of time to savour the view before we surfed the ridge with a tail wind towards Innerleithen. Cresting a ridge after a few miles I spotted a familiar sign, "7 Stanes Red". Several miles of fantastic trail centre descent wound sinuously across the hill dropping us back into the Tweed valley where we refuelled at the Co-op. I made friends with a small dog tied up outside the shop after sharing one of my now bruised homemade burritos with it whilst Saul ate cheese sandwiches. 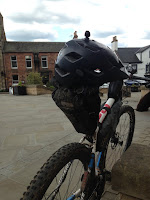 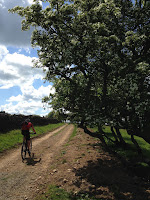 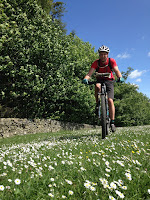 From Innerleithen we rode south into a stiff headwind past Traquair house and up onto the rounded heather clad moors south of Peebles. At the end of the estate track we faced a route choice, hike-a-bike straight on or ride round to the left. We opted for the hike-a-bike straight up onto the moor but unfortunately the steep track petered out leaving us wading though thigh deep heather on soft mossy lumps. The track marked on the map at the top of the climb was overgrown with heather and unrideable, so we spent an an hour getting back onto a rideable track. We were both questioning the point of this diversion, half an hour later midway down the descent into Gypsy Glen it was obvious. This descent ROCKED!!! Smooth dry peatland gave way to close cropped meadow and finally woodland at Gypsy Glen. Better than many of the Glentress downhills and yet neglected by the hundreds of MTB'ers pouring into that Trail Centre. We weren't complaining, for twenty minutes we owned the place.

From Peebles we enjoyed familiar trails in Glentress, it was after 8pm so we had the descents to ourselves, a rare privilege. Back in Peebles I spotted an open chippy and treated us both to a portion of salt and vinegar laden chips, I didn't know how tough the rest of the route might be, but chips could only help see us though into the wee small hours. 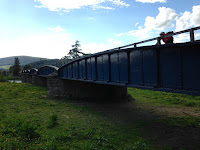 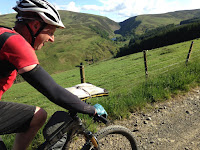 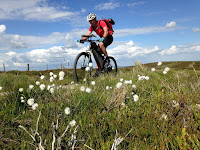 Old drove roads led us out of Peebles and across more moorland, a few steep climbs reminded us that this wasn't meant to be easy, but generally the going was good. I chased a badger down a grassy descent and the sun dropped beyond the horizon. The moon rose to share its milky hue with all who were still pedalling at this hour. Shortly after midnight we climbed into the Pentlands, these were right on the edge of Edinburgh yet still wild and beautiful. We looped though this cluster of rounded hills before dropping into the west side of Edinburgh following various tributaries down to the Firth of Forth. Sensing the finish line we picked up the pace here spinning fast in top gear on the promenade alongside the sea as an orange glow brightened the eastern skies ahead of us. A diversion into Edinburgh along sunken railways gave us a flavour of the Victorian city before looping us back on to the promenade and into Portobello beach. A few minutes later Andreas Shäffer rolled in behind us and took our photo. Just the six miles back to the campsite and sleep would be mine. 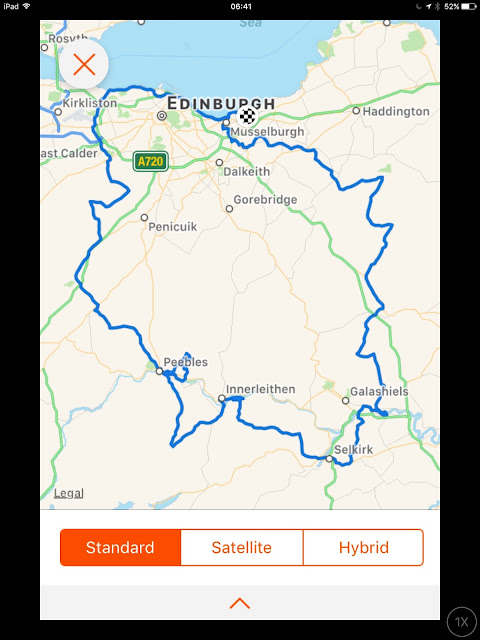 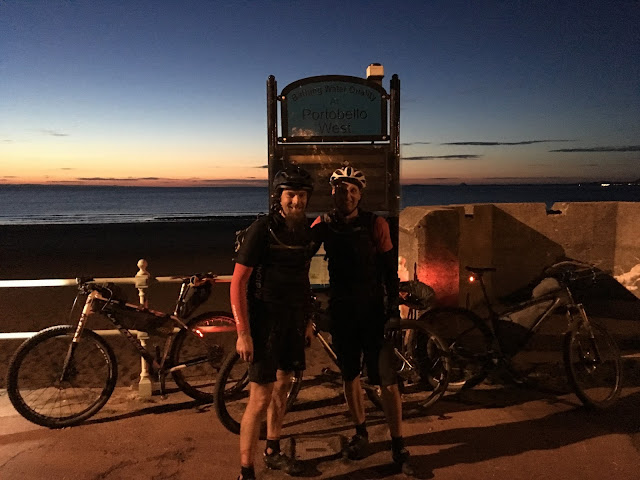