A sharp climb up a narrow lane flanked by rambling dry stone walls leads up to a basin over which old slate workings loom. Zigzag tracks scythe across the mountain side. Bikes are handed over a locked steel gate and the climb is on.

This is the Racing Collective's XDUROWales18, nearly 200 miles of mixed terrain riding between the Menai Bridge and Cardiff waterfront. We'll take two days to complete it, that's if our bikes, backsides and tyres hold out. There's 1700 feet of climbing in the first ten miles today, this is looking like a decent challenge.

The pace of our small group is sociable enough and after 10 minutes or so we round a hairpin to a small terrace littered with blue slate from which we have a commanding view of Llanberis and the lakeside slate workings. I roll off down the descent and my 40mm tyres are soon throwing shards of slate out behind me creating a  cracking sound,  the temptation to speed over it is intoxicating. I hear a shout behind me, Nige Smith’s rear tyre is spewing sealant from a long rip in the sidewalk. We stop and fix it, the first casualty of many in our group. Tyres fixed and we descend towards the lake with considerably more care. From a viewpoint further down we stop to soak up the vista; Llanberis nestles beside the deep blue lake at the head of which a turret of abandoned Slate works sits to thevleft of the main road. 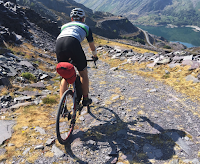 Riding with Nige we tick off Llanberis pass, the A5 and a hike-a-bike climb. We’re making good progress now and it’s not long before we pass the Centre for Alternative Technology on a quiet leafy lane that I recognise from my last visit here. We’ve dropped out of Snowdonia into mid-Wales but the climbs keep coming, the last of the day is the longest. Sharp kicks give way to false summits as I slowly head to wards the head of the horseshoe shaped valley . The road runs out and I drop down a brief descent to a forestry track along which a rally car is speeding towards me. Fortunately the track is wide enough for the car to slide past a leaving a trail of choking white dust. 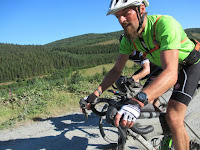 Emerging from the top of the forest the track undulates across high moorland to an isolated reservoir before dropping down to Daf’s farm where we’re bivvying tonight. He's a great host providing a hot shower, good food, a bottle of beer and a bonfire. The next morning he puts on an impressive breakfast spread of porridge, sausages and eggs. Just what we need to fuel another 8000 feet of climbing, much of it off-road. I notice more wildlife today, a young fox plays with its shadow ahead of us on a gravel climb whilst further on a red kite picks through a sheep carcass in a quarry for its breakfast. Two 4x4s are parked up miles from a road on a beach beside the Claerwen reservoir high in the Elan valley whilst their drivers fish in the deep blue water. 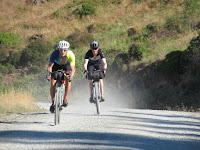 An energy sapping section of hike-a-bike soon follows, thirsty horse flies keep us moving over a lumpy watershed but we’re suffering in the heat. Sweat streams down my face on the climbs and I need to stop and re-hydrate by midday. We briefly escape the glare of the sun in a filling station but we can’t hide for long, it’s another 65 miles to Cardiff. Next stop Brecon town, but not before we’ve climbed  a lengthy ramp up onto the MOD training grounds which mark the start of the Brecon Beacons. Miles ahead of us is a  gap in the ridge through which we are soon climbing on the last timed segment of the day. It’s loose and rocky in places, my bike is thrown off line repeatedly as I wrestle the bars to keep it moving, the final ramp and hairpin are completed on foot. The descent to Merthyr Tydfil would be quick on a mountain bike but the loose rocks brake my progress, a ripped tyre here in the 30 degree heat would be more than inconvenient.
Thats the last timed segment completed, it's pretty much downhill to Cardiff from here, we wind our way down the valley dodging the main road. This is the Welsh valleys, townships built around the mines that powered British industry for decades. Today kebab shops, salons and and bookies occupy the streets where butchers, grocers and bakers once kept the industrial machine moving. A former railway line leads us into Cardiff past swimmers in the river and couples soaking up the unusually hot sun in a park. Our north-south C2C is done; we've seen many different incarnations of Wales- the post industrial south reached via the mountains of Brecon, the rounded hills of mid Wales our reward for surviving the slate of Snowdonia. A proper journey and another land whose familiarity we've earned. 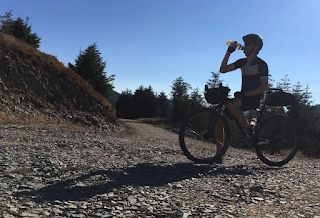 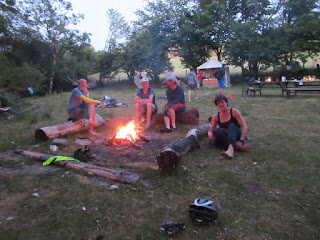 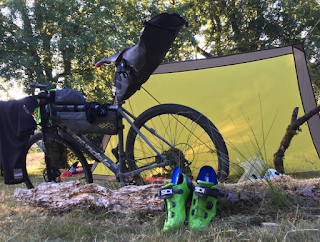